I’ve heard criticism from serious runners about using CrossFit to train or become stronger. But I’m not really a “serious” runner. That being said, CrossFit has really helped me become a better runner and here’s why.

Why Cutting Back Helped

I didn’t plan on this but it happened. Before CrossFit, the extent of my strength training was…sometimes lifting free weights and doing push ups. There was no leg work to be spoken of.

I figured I was doing so much running, my legs would be strong enough from that. But building strong leg muscles takes more than just running. Obviously, that helps. But to be a better runner, you need stronger legs, stronger core and even upper body.

When I jumped into CF, I cut down my running — by a lot. I focused on hitting the box and got in 1-3 miles a couple times a week running to and from.

When it came time to train for the fall marathon season, I was worried. My running had been so infrequent – would I be able to get back to where I was?

Surprisingly, I had no problem. And — even better — I had no nagging aches and pains. Previously, when the heavy running kicked in, I always always always ended up with knee problems, weak ankles, etc. After spending six months on strength training at CF, those things simply didn’t appear.

My newly found muscle protected my body and made running, better, faster, stronger. In fact, it was right after that I achieved a sub-4 marathon, a goal I’d had for over 2 years. Then, I did it again  3 weeks later at another marathon.

I know that CrossFit played a huge part in helping me reach my goals and become a stronger runner. This year, I’m giving it another test. I’ll continue to CrossFit while training for the marathon and rely on much less mileage than I normally would during a training season.

After hearing so many CFers do it successfully, I’m curious to try it out for myself. I’ll report back!

This blog post was originally posted by Trident athlete Ericka Andersen on her site sweetlifeericka.com. She’s always on the run. 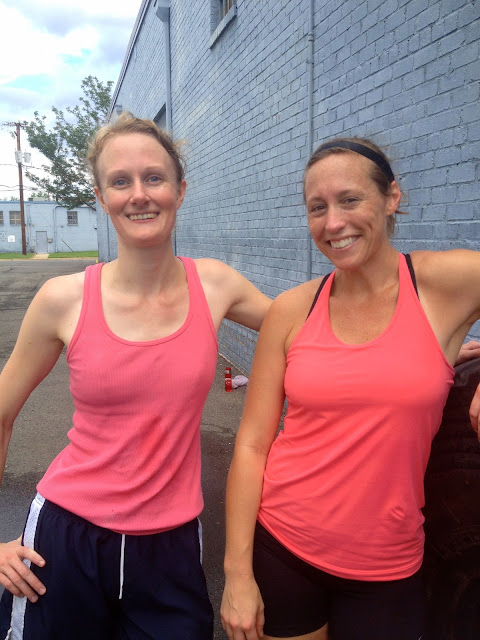 Two weekends ago I had the awesome experience of attending a Crossfit running and rowing workshop at Trident Crossfit.

I was pretty excited when I saw it was being offered because they planned to go over principles of Crossfit Endurance — something I’ve had a hard time wrapping my head around.

I wasn’t too concerned with rowing but figured learning technique couldn’t be a bad idea. Mike and Emily Porterfield — staff at Trident — taught the class. Both of them have a professional background in coaching rowing and running, respectively. 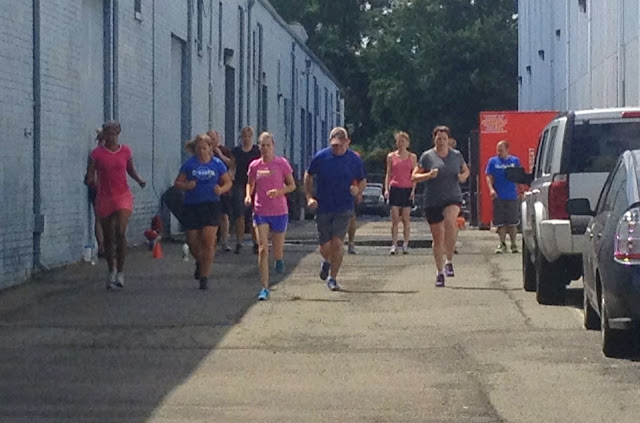 I’ve heard over and over that CFE marathon training lets you do WAY less miles and still be prepared for a marathon. I am well aware that many marathon runners do not believe in this technique (Hi, Glenn!)

I’m not sold on it myself — BUT because I would like to stay in Crossfit this training season and NOT devote my life to double workouts everyday to train for my fall marathon — I’m giving this a try. Also, I don’t have my heart set on a big PR this year. I’m more than happy to give it a try and see what happens! 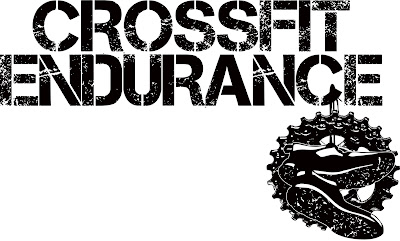 In short, CFE is all about the skill and technique of running not overall miles. I’ll still get long runs in but perfecting the technique combined with strengthening my entire body (legs, core especially) with traditionally WODs 5x/week, I’ll be in good shape to run 26.2 come November.

As I mentioned last year — I had NO pain or injuries during training (traditional) for the first time ever — and I credit the strength I gained from Crossfit for that.

I had hear of “pose running” before but didn’t know what it was. It’s a simple running technique based on the idea of running with a fall forward motion, a straight core, neutral head and pulling your leg up rather than down. Here are four things to remember about pose running:

We started with a description and then ran through some great drills to get us going. Emily kept saying when you start pose running it feels like “wearing someone else’s underwear” – ha ha — so, it feels weird. And it does! But the drills we learned will be really helpful in learning how to make it work. 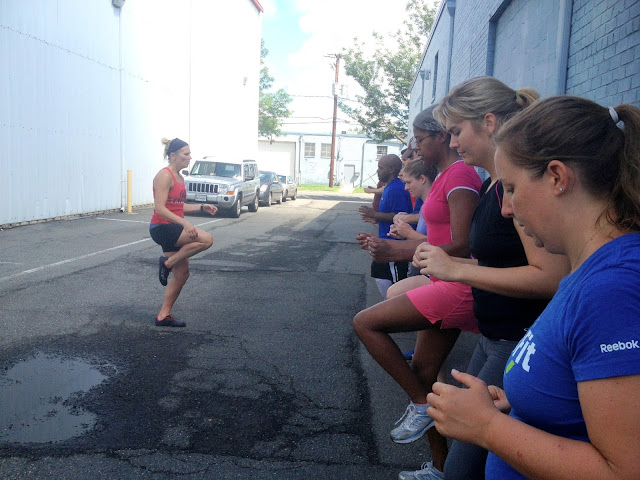 First, learn how to just pull your leg up and down from the ground with the opposite leg bent. You need to get used to pulling your leg up — instead of slamming it into the ground.

Second, learn to run leaning forward with a straight-lined body. Keep your head netural and run towards the balls of your feet. For sprinting, it should all be exaggerated. For long distance, it’s less exaggerated.

This video does an excellent job of explaining it:

Those who use the pose method usually favor minimalist shoes as well. It’s simply a natural choice because you are working to be so in tune with your body’s natural function of running — and barefoot/minimal shoes allow your body to feel the ground more naturally. 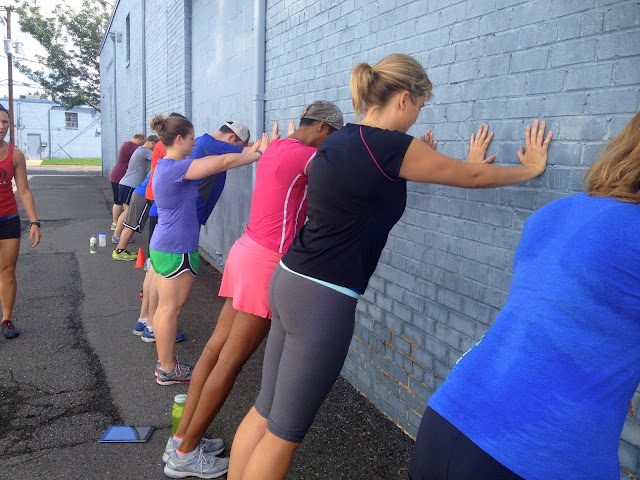 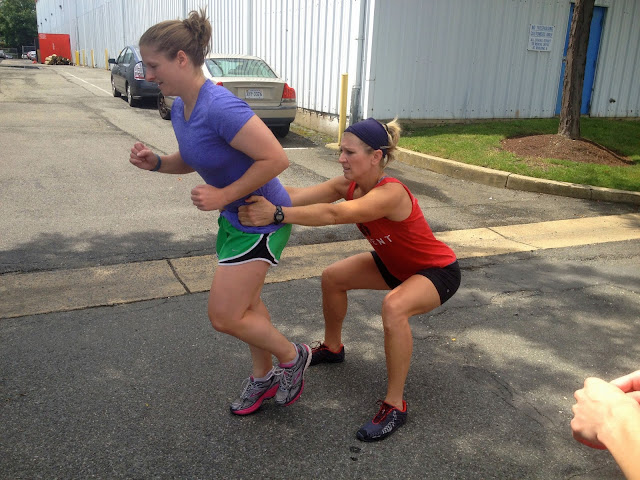 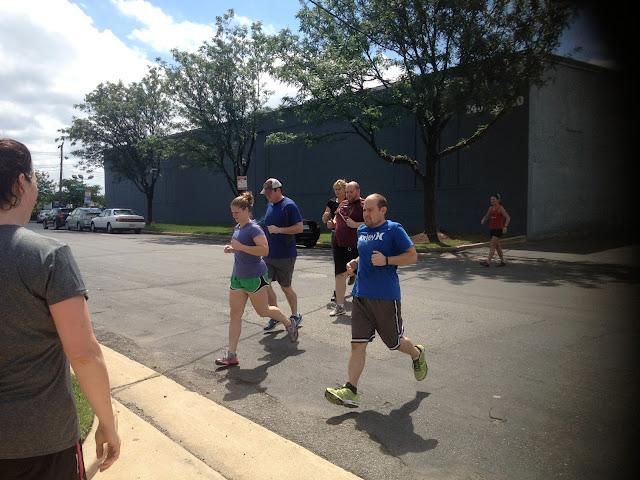 I got a great foundation for pose running and began to better understand the foundations of Crossfit Endurance. Trident is offering a CFE class really soon — and I’m going to join so I can really give this thing a shot. I’m planning on practicing these drills before I run from now and seeing if I can’t perhaps get a little speedier. Of course, you also have to combine this with tempo runs, sprints, and mile repeats. It’s still a lot of hard work.

One can always learn how to row more efficiently. I certainly had no formal training in it so learning from a real rowing coach was helpful. When you first start rowing, you don’t think of it like other power lifting exercises — but it’s actually very similar to a deadlift. Here’s how Crossfit Journal explains it:

The rowing stroke is very similar to a deadlift. In the drive (work) phase, the legs initiate the power, and arms remain straight. Then the hip flexors and torso muscles maintain the power through the leg and hip drive. Finally, the arms finish the stroke with an accelerating pull toward the torso that completes the smooth handoff of power from lower body to torso to upper body.

It doesn’t feel natural when you start doing it right but it will definitely get you faster and more efficient with your energy supply. If you are rowing correctly, your legs are going to feel it. If your arms are doing the work — you’ve got it wrong. 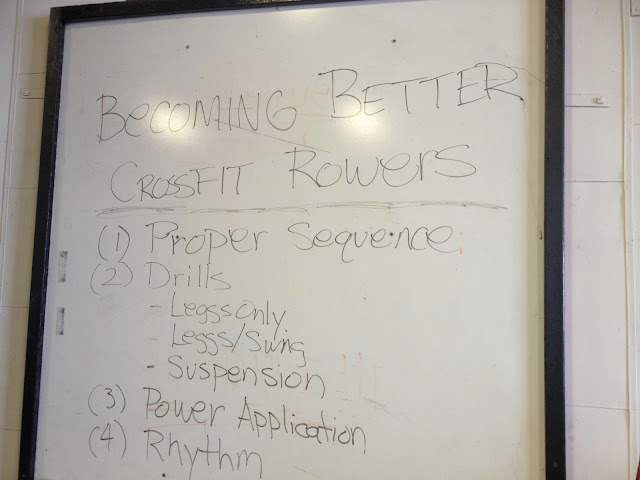 This says “crossfit rowers” but it applies to anyone who regularly uses a rowing machine to work out. We practiced by breaking it up into sections and getting each down well before putting it together. 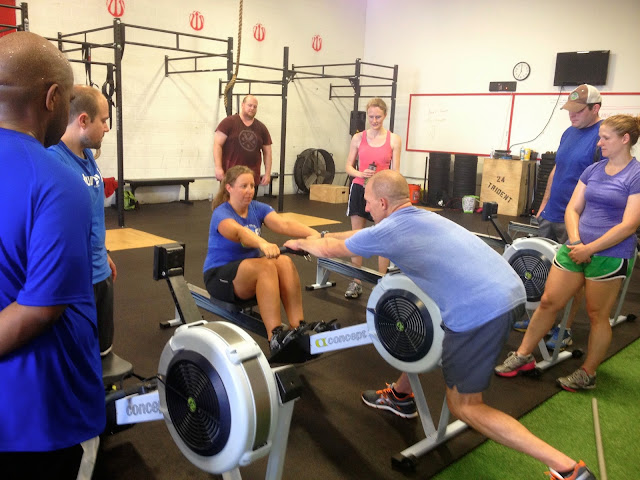 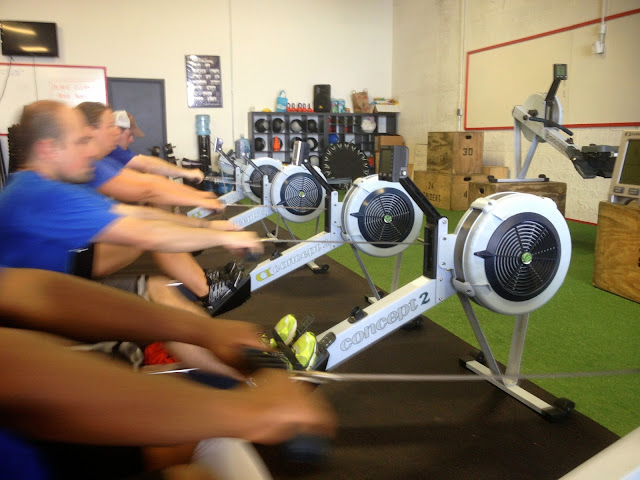 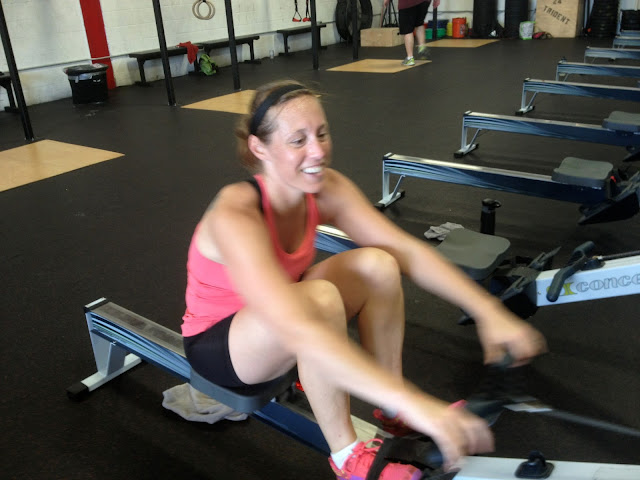 After lots of practice and learning, we settled back in for a recap. I was mostly concerned with how Crossfit Endurance would work for marathon training.

That’s just a nutshell –– there’s plenty more I will learn & have questions about in the future no doubt. But this class was definitely worth my time to learn some new basic stuff and get on the bandwagon for my fall marathon training. 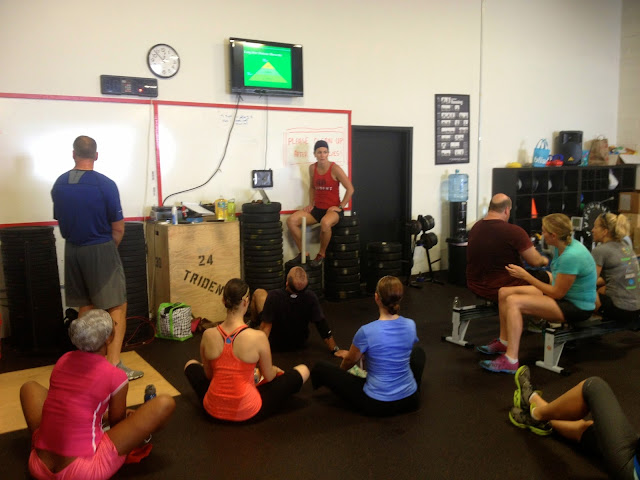 We are in the “Open Mixed” category.

Please let me know if you have any questions. We want Trident to be well-represented.