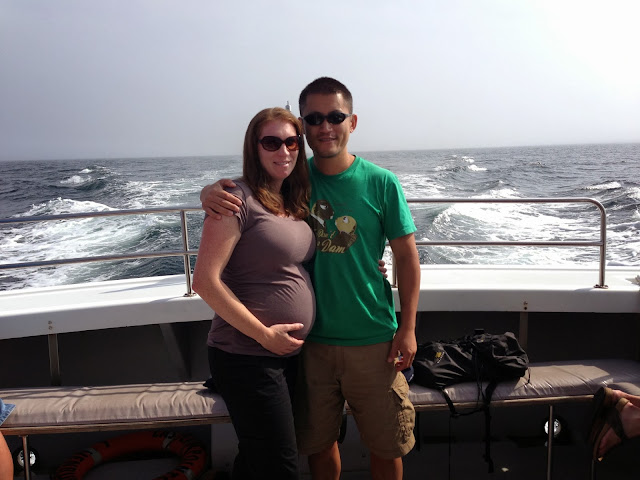 CrossFit has received a lot of criticism lately and well, you know how I feel about some of that. But what about doing CrossFit (or weight lifting) while pregnant — not just a few months along — but nearly 9 months? One woman was recently criticized for a photo showing her doing just that.

I first heard about the controversy on Jezebel and loved their response to it. Then, I thought about the handful of pregnant women I’d seen working out at Trident recently.

At Trident CrossFit (my box) on the wall, there is a poster specifically talking about the precautions to take while CrossFitting pregnant. As someone who plans to workout at least in some capacity when I become pregnant, I’m definitely quick to be defensive of women doing so.

I took the opportunity to interview my friend, fellow CrossFitter Kelly Shannon. She’s still at it with a due date of October 25th! Kelly is full of energy and I’ve noticed how careful she’s been to not over do it. Take a look at this interview and judge for yourself.

An Interview with Kelly, Pregnant CrossFitter

1. When did you start CF? What do you like about it?
I started in July 2011, and quickly learned the benefits of working out in the morning verses the afternoon (DC summers are really hot and humid when there’s no AC at the box)! Once I made the switch, I came to really love working out in the morning — though I still have my days of hating the alarm clock when it buzzes so early.

3. Did you ever consider stopping CF while pregnant?
My plan was always to continue if my body and my doctor allowed it. If there had been any medical reason to do so, I would have stopped immediately.

4. Many have concerns for pregnant women doing weightlifting, etc. — what do you say to the skeptics?
I think everyone’s body reacts differently to various stimuli. For some pregnant women, continuing exercise at a certain level is reasonable. For others, it’s not.

I certainly have a number of friends whose pregnancies were not as easy as mine (I didn’t have morning sickness,  food aversions, minimal leg cramps or swelling/edema, etc.). They listened to their bodies about how much exercise or activity they were willing to do.

Also, everyone’s viewpoints are colored in part by their experience and exposure. For those who have seen pregnant women struggle through basic activities, or who have been put on bed rest — I could see where they might find the idea of me lifting weights throughout my pregnancy appalling.

There’s also been a recent shift in the medical community about exercise during pregnancy. A growing body of research that suggests that exercise is safe, even significantly beneficial, throughout pregnancy.  Consider that medical guidance in the 1980s was that pregnant women shouldn’t lift over a 25 lbs, but modern medicine has revised that guidance 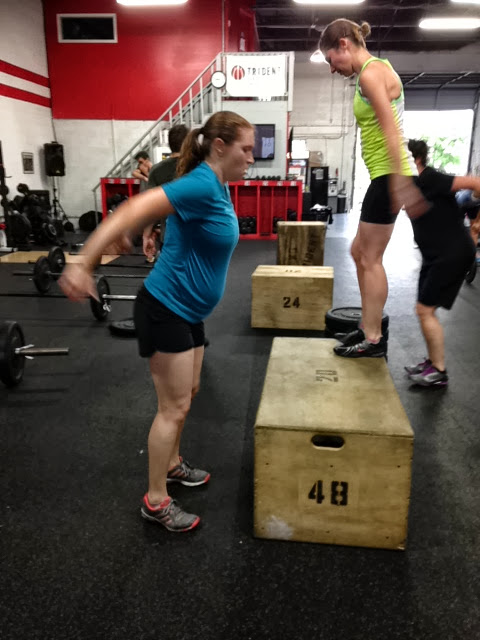 5. When is your due date? How long will you continue to workout?
My due date is October 25th. I plan to workout until there is a medical reason not to do so. I’ve been lucky and have had a very easy pregnancy, relatively speaking. I’ve definitely had to take things down a notch in the last week or two (weeks 35 and 36 of my pregnancy) as my belly has gotten bigger and I can feel my joints loosening (due to the hormone Relaxin, which softens the joints in preparation for delivery).

6. How is doing CF different now than before? What precautions do you take?
I spoke with my doctors about doing CF and got their input. I’ve played soccer almost all my life and was still playing when I got pregnant. My doctors ruled out soccer immediately, largely because I had previously had a surprise pregnancy in 2012 that had resulted in a miscarriage almost as soon as I discovered was pregnant.

My doctor’s were fine with my continuing CF, provided I avoided running or jumping in the first trimester (again, based on an abundance of caution due to the previous miscarriage) – so I did a lot of rowing.

Once I got through the first trimester, I was cleared for running and jumping (and I was very happy to take a break from rowing)!  I was also a bit more conservative in my weightlifting during my first trimester and monitored my intensity by keeping aware of my body temperature and breathing to ensure I wasn’t getting too warm or too far out of breath.

I also used Crossfitmom.com as a reference/guide, and was lucky that Trident CrossFit also put up a Crossfitmom.com poster with trimester-based guidelines right around the time I announced my pregnancy.

7. Do you know others who have continued CF while pregnant? What did you learn from them?
There are a number of women at Trident CrossFit who inspired me as I watched their progression through pregnancy prior to my own. I’ve also been lucky to be pregnant at the same time as several other women at Trident, and we share experiences and recommendations.

8. Your husband does CF too right? What did he think about your decision to continue working out?Yes, he was very supportive of me continuing to workout throughout my pregnancy. We had one disagreement about my continuing to do box jumps around my 6th or 7th month.  I did the 31 Heroes WOD at 28 weeks, and while I switched from running to rowing in them middle, I had no problems box jumping the entire WOD.  While I definitely acknowledge that his concerns were valid, I still felt very confident doing box jumps and continued to do them until starting to scale to step-ups at around 33 or 34 weeks. 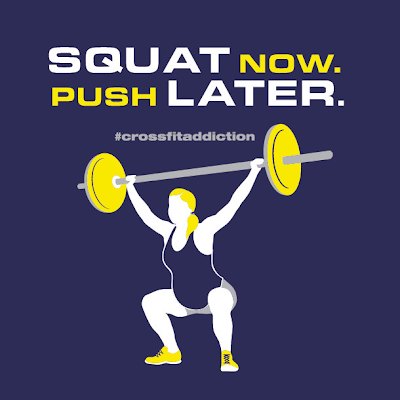 9. Why do you think there is so much controversy about women weightlifting while pregnant?
Probably because the previous medical guidance for pregnant women was to avoid picking up anything over a certain weight (e.g. 30lbs).  However, I think that the medical community has progressed in its understanding of how pregnancy affects the female body . The medical guidance has certainly matured to recognize that if a woman was active before, she can continue to be so in a similar manner while pregnant (with certain limitations/precautions).  I was CFing for over a year and a half before I got pregnant, so I felt confident continuing with appropriate modifications.

10.  Any moves you simply don’t do right now? What is the biggest challenge?
I generally followed the Crossfitmom.com trimester-by-trimester guidance, but I also listened to my body. For example, I kept doing deadlifts instead of subbing sumo deadlift high-pulls (SDHPs) well into my third trimester by putting the weighted barbell up on two 45lb plates. I also did not pursue any PRs (personal records) after my first trimester.

In addition, between my 12th and 13th weeks, I definitely noticed when my abs separated (yep – that’s what happens during pregnancy, your abs actually separate). I didn’t feel anything, per se, but I definitely noticed the difference when I went through my mental/physical set up for a lift – when I went to tighten my core, something didn’t feel right.  It took me a minute to realize that while my back was as stable as it normally was, I couldn’t engage my abs!

Also, after the first trimester, pregnant women are advised to avoid laying on their backs (this is due to the potential of putting the weight of the baby/pressure on a vein – the Vena Cava – that runs along the left side of the body under the uterus), so I haven’t done any fully prone bench press since my first trimester.

Thankfully the coaches at Trident helped me come up with a modified bench press where I prop myself up on a med ball and use dumb bells to get a similar stimulus. In general, I’ve been more conservative in my third trimester, going lighter on the weight as my pregnancy has progressed and as I feel my joints loosening. 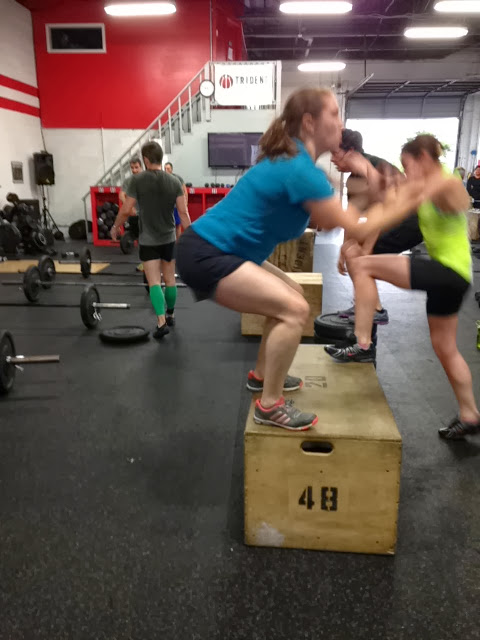 11.  What are your favorite WODs/moves normally? While pregnant?
Oddly enough, even before pregnancy my favorite exercises would rotate a bit depending on the weather and how I was feeling in a certain time period. I’m probably better at process of elimination – so I’ll start with what I don’t like much at present: I’m definitely tired of doing K2E (aka N2K), since that’s the only available sub-out for any ab-related exercises. I’m now looking forward to running instead of rowing, and I’ve never been much of a runner if there’s not a soccer ball in front of me.

I miss the olympic lifts I can’t do right now, such as power cleans and snatches, since I’ve always enjoyed the technical aspects of those lifts.

12.  How about energy level? How has that affected your workouts?
There have been very few days where I’ve felt really tired throughout the day. Sure, in my 1st and 3rd trimesters I fell asleep on the couch around 9-9:30pm quite a bit, but during the mornings and the daytime, I’ve usually felt pretty good and had decent energy. However, I definitely have more energy on the days I go to CF in the mornings than when I don’t (and that was true prior to pregnancy, too).

13.  Will you come back to CF after your baby is born?
Absolutely!  Of course, that will be after my body recovers from delivery and I get the doctor’s ok to return to working out.

Thanks to Kelly for answering my nosy questions about CrossFitting while pregnant!